The Top 10 Sights of Madagascar

Since the animated film "Madagascar" at the latest, the second largest island state in the world (after Indonesia) has been a household name for most people. For travellers who like to visit exotic countries where mass tourism is still in its infancy, Madagascar should definitely be on the bucket list.

Jungle, lemurs and unpronounceable names: On Madagascar, the tombs and palaces of past kings, tropical rainforests with unknown animal species, dreamlike beaches and an untouched underwater world impress. The modern capital Antananarivo is right next to Ambohimanga, the majestic hill of the king, whose ruins still bear witness to the magnificent buildings of past centuries.

The best time to travel to Madagascar is between April and October, with the peak season starting in July. The rainy season lasts from November to March and the east coast is often hit by tropical storms, especially in January and February. Air and water temperatures in Madagascar's tropical climate are around 30 °C all year round.

Madagascar is a multifaceted country of contrasts and attracts visitors for active holidays in the mountains and national parks as well as for relaxing holidays on the paradisiacal coasts and deserted islands. Our top 10 sights of Madagascar are just as diverse and are sure to meet every traveler's taste!

Until 12,000 years ago, Madagascar was a barren rocky island where five volcanoes barely supported life due to regular eruptions. Since calm has prevailed, the tropical island in the Indian Ocean has been overgrown by dense forests with numerous animal and plant species. The remains of volcanic activity from the Pleistocene are unmistakable from the five volcanic fields.

For example, around the crater lake Itasy, Madagascar's third largest lake, there are countless geysers, smoking holes in the earth, hot springs and extinct volcanic craters to see. Likewise, around Ankaratra, the island's second highest mountain, there is solidified lava and crater lakes to marvel at.

The volcanic fields of Ankaizina and Ambre-Bobaomby in the north of Madagascar today provide a home for endangered bird species and a wide variety of lemur species with a boiling hot past. Madagascar's fifth volcanic field is located on the island of Nosy Be, also in the north of the island. Crocodiles have now settled in its crater lakes, which are considered a sacred ancestral site.

Morondava and the Baobab Avenue

Besides the volcanic fields, the giant baobabs are the second sight that makes Madagascar so special. The seemingly inverted tree giants on the west coast of Madagascar near Morondava are particularly spectacular.

Their thick trunks with the characteristic gnarled branches rise into the sky about 45 minutes by car from the coastal town to the left and right of the road to Belo Tsiribihina.

Tip: In February and March, the baobabs (or baobabs) are particularly pretty to look at - that's when they blossom.

Apart from the Baobab Avenue, Morondava ("where the coast is long") also offers paradisiacal beaches with lots of sun in a relaxed holiday atmosphere. Unfortunately, bathing in Morondava is not advisable due to the currents.

Morondava is also a perfect starting point for a visit to the Tsingy de Bemaraha National Park. Its name loosely translates as "where you cannot walk barefoot". Anyone who gets to see the unique karst landscape of the national park will also immediately know where this name comes from. Countless stone peaks, some of them razor-sharp from the wind and weather, cover the entire national park like a spectacular forest of rock needles.

Apart from the bizarre rock formations, the flora and fa una in Tsingy de Bemaraha National Park is also unique. Over 80 percent of the plants thrive nowhere else in the world. The spiny-dry forests of the highlands and the wet lake areas of the valleys are home to 100 bird species and 13 different lemurs.

The labyrinths as limestone with their caves, gorges and plateaus can be explored on hiking trails or by sightseeing flight.

The Isalo National Park in the southern highlands of Madagascar also captivates with its bizarre rock formations of Jurassic sandstone. In the vast savannahs and grassy plains, the cute calicoes hiss around and there are chameleons to be discovered in the bushes.

Established in 1962, the park is located directly on the RN7 and is therefore easy to reach by car. The hiking trails through the 80,000-hectare Isalo National Park are all well developed and range from a few hours to several days.

Tip: If you want to explore the national park by car, you should definitely have an off-road vehicle with four-wheel drive!

One of the main attractions of Isalo National Park are its natural pools. Blue Pool, Black Pool and the absolutely picturesque Piscine Naturelle invite you to take a refreshing plunge into the cool water after a hike through the impressive mountain landscape. The park's canyons, which are up to 200 metres deep, or a hike to one of the waterfalls also provide cooling.

In Ranomafana National Park, it is not the mountain ridges and rocks that are the attraction, but the lush green mountain rainforests. Nowhere else in Madagascar can hikers better immerse themselves in the wild tropical nature of the island nation. Lemurs scurry through the treetops, geckos snap at butterflies and exotic flowers line the hiking trails, which can be explored on tours lasting up to 4 days.

In the middle of Madagascar's third largest national park lies a spa hotel that makes the natural thermal springs accessible for relaxation and healing purposes. Incidentally, these also gave the national park its name, because Ranomafana means "hot water".

The best time to visit Romafana National Park is all year round, although August has the least rainfall. The tropical hot and humid climate, on the other hand, hardly changes.

The island of Nosy Be around 10 kilometres off the north coast of Madagascar is worth a trip not only because of its turbulent volcanic remains. The "Big Island" is one of the most popular tourist destinations in Madagascar and is also called "Perfume Island" because of its sugar, vanilla, clove and cinnamon plantations.

About the size of the German island of Rügen, there are only about 350 guest rooms on Nosy Be, which are booked out long in advance. Those who get hold of accommodation are rewarded with a dream holiday in paradise far from mass tourism.

Because Nosy Be is a perfect holiday island where temperatures range between 20 and 30°C all year round. Nevertheless, thanks to the frequent (mostly nightly) rainfall, Nosy Be is lush and green and boasts breathtaking nature. Beautiful sandy beaches, tropical nature reserves, gushing waterfalls and crater lakes with crocodiles, as well as the bars and discos of Ambataloaka form a colourful mix of activity and entertainment that makes holidays on Nosy Be so special.

The former pirate island of Nosy Boraha on the north-east coast of Madagascar is a dream holiday paradise, just like Nosy Be, but much more unspoilt.

Tip: From June to September, even humpback whales pass by here. They leave the cold waters of Antarctica to give birth to their calves further north.

About 20 kilometres north of Madagascar's capital Antananarivo is the historic capital Ambohimanga. Until the late 18th century, the kings of the island state had their residence in the best-preserved palace complex in Madagascar. Since 2001, the now sacred site has been a UNESCO World Heritage Site.

From the 15th to the 19th century, construction took place at Ambohimanga. Around the royal palace, the rather plain "Rova", the royal bath, a sacrificial place, a court seat and the tombs of the kings were built on the palace grounds. The remains of these can still be seen today and still make Ambohimanga an important pilgrimage destination where Madagascans go to ask their departed rulers for help and advice.

Also in Antananarivo is a rova, a Malagasy royal palace. It was built in the 17th century, when Madagascar's seat of government was moved from Ambohimanga to Antananarivo. From then on, the heavily fortified palace was the cultural and political centre of the recently unified empire for about 300 years.

The Rova is located at an altitude of 1,500 metres around 200 metres above Antananarivo and offers a fantastic view of the city. Palaces, temples, residences, a chapel and the tombs of the royal family can still be visited on the seven sacred hills. Most of the wooden buildings were destroyed by fire in 1995, and it was not until 2010 that the royal palace was reopened to visitors after renovation.

Since 2020, a (controversial) coliseum has been enthroned on the tombs of the kings, providing a fantastic backdrop for cultural events in front of an audience of 400 people.

Besides the Royal Palace, the Analakely Market is the second famous sight in Antananarivo. It is the largest market in the city and also known as Zoma Market. There is always something going on at the Analakely Market, because in the colourful pavilions the locals find everything they need for daily life.

Brightly coloured fruit and vegetables, fish, meat (who fancies grilled lizards?) and clothing make up the bulk of the goods for sale. Household goods, electronics and DVDs are also available, as well as African handicrafts.

If you are looking for souvenirs, this is also the place to go. Haggling and bargaining are the order of the day here - unfortunately, so is pickpocketing, so it is better to leave your valuables at the hotel.

PICTURES: The top sights of Madagascar

Accommodation and hotels in Madagascar (booking.com):

Interesting articles for holidays in Madagascar: 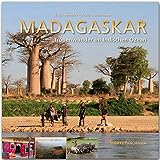