Travel to Abu Dhabi without any tourist traps: Here you will find the top 10 sights in Abu Dhabi. Read which highlights and attractions you should not miss on your holiday in Abu Dhabi!

With glittering skyscrapers, top-class luxury hotels, majestic mosques, dreamy beaches, falcons, Ferraris and Formula 1, the sights of Abu Dhabi have long since ceased to be overshadowed by Dubai and form an attractive holiday destination in their own right on the Arabian Peninsula.

The magnificent Sheikh Zayid Mosque in Abu Dhabi is the third largest mosque in the world. The Sheikh Zayid Mosque was built of snow-white marble and decorated with floral elements, precious stones and mother-of-pearl. The architect received specific instructions from the Sheikh, which were taken from the descriptions of paradise in the Koran.

The Corniche with the extensive Corniche Beach is the most popular promenade in Abu Dhabi. For around 8 kilometres, the beach and sea stretch out on one side, while the other side is lined with cafés, restaurants, green spaces and children's playgrounds. The tallest buildings and the most luxurious hotels in Abu Dhabi can be found here. The Corniche is a perfect setting for a relaxing day of holidaying in Abu Dhabi.

The world's largest Ferrari Park on Yas Island in Abu Dhabi delights young and old and is considered a landmark of the city of Abu Dhabi. Ferrari World is an absolute must for Ferrari fans. Even the theme park in Ferrari's hometown of Maranello is not as extensive as the diverse Ferrari World in Abu Dhabi. Tickets can be reserved online in advance.

The Emirates Palace Hotel with its 302 rooms is a 7-star luxury temple and looks like a palace from the Arabian Nights. In the enormous lobby, hotel guests are often stunned by such splendour when they first enter. The lobby and "Le Café" are the only areas of the Emirates Palace Hotel that can be entered without a room or restaurant reservation.

In Abu Dhabi, there is a special falconry clinic that offers the world's best medical care for the proud birds of prey and has meanwhile become a place of interest. Since 2007, Abu Dhabi's falconry clinic has also been open to the public and can be visited via guided tours. Personal contact with the majestic birds included!

In the Paradise Gardens of Al Ain you will find a flowering splendour of the extra class. Around 10 million flowering plants form pyramids, hearts, geometric patterns and decorate paths, flower beds and sculptures. The Paradise Gardens of Al Ain contribute significantly to the fact that the "Garden City" of Abu Dhabi is the city with the highest water consumption in the United Arab Emirates. The visit is free of charge.

The spectacular Etihad Towers complex dominates the cityscape on Abu Dhabi Island. In addition to a hotel, shops and several restaurants, it also offers the highest vantage point in Abu Dhabi. The Etihad Towers rise directly opposite the luxurious Emirates Palace Hotel on the coastline and give Abu Dhabi's skyline its unmistakable appearance.

Saadiyat Public Beach is completely natural and is considered the most beautiful beach in Abu Dhabi with its fine white sand, turquoise sea and city skyline in the background. The beach is 9 kilometres long and is located in the middle of a dune protection zone.

The Al Jahili Fort was built between 1891 and 1898 under Sheikh Zayed bin Khalifa and is one of the largest and most beautiful fortifications in the United Arab Emirates. It is one of the most important historical sites in the oasis city of Al Ain. The fort has been carefully renovated and can be visited as a museum.

Accommodation and hotels in the United Arab Emirates (booking.com):

Interesting articles for holidays in the United Arab Emirates: 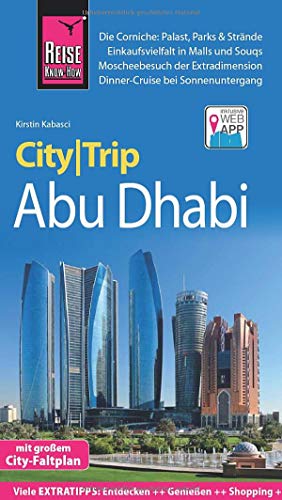