The Kyrgyz capital Bishkek was only founded in the 19th century. The modern metropolis makes up for the lack of historical monuments with its spectacular location on the Tian Shan Mountains and its cosmopolitan and cosy flair of magnificent squares, cosy cafés and lively shops.

The Kyrgyz capital Bishkek, one of the youngest and most modern metropolises in Kyrgyzstan, is located in the north of the country directly on the edge of the central Tian Shan mountains, which extend to the border with Kazakhstan.

Even from the centre, the peaks of the "sky mountains" reaching up to 5,000 metres can be made out. For day trips to the Ala-Archa National Park or to the idyllic lakes Son Kul and Issyk Kul, Bishkek is the ideal base.

Located at 800 metres above sea level, Bishkek was little more than a collection of mud-brick caravanserais and simple peasant huts on the Silk Road until 1878. In 1926, it became the capital of ASSR Kyrgyzstan under the name Frunse, after a Soviet army commander during the Russian Civil War. For this reason, the airport abbreviation of Bishkek is FRU to this day.

It was only in 1991, after the collapse of the Soviet Union and the independence of Kyrgyzstan, that Bishkek was chosen as the capital and began to grow significantly. The country's largest airport, Manas Airport, which also hosts a US Air Force base, is located about 35km northwest of Bishkek.

Today, around 2 million people live in the greater Bishkek area, which enjoys the amenities of a modern city with several universities, cultural institutions, restaurants, cafés and shopping facilities. During the Soviet era, the city was best known for its fighter pilot school, where, among others, former Egyptian President Hosni Mubarak was trained.

The Soviet era is still undeniable today. Wide tree-lined boulevards, marble-clad buildings and the typically functional apartment blocks characterise the cityscape. The centre of Bishkek is still Ala Too Square, around which the planned city was built like a chessboard.

Ala Too Square was inaugurated in 1984 to mark the 60th anniversary of the ASSR Kyrgyzstan and has been the scene of numerous state celebrations, rallies and large-scale protests. The changing of the guard can be observed once a day at the Independence Monument.

In the beginning, the square was dominated by a huge monument to Lenin, which was replaced by a peace monument in 2003. Today's monument to the mythical Kyrgyz folk hero Manas took its place in 2011. Incidentally, another monument to the legendary Manas can be seen in front of the Philharmonic Hall on Chuy Avenue about 15 minutes' walk east of Ala Too Square.

Here you will also find the Bishkek History Museum, which provides detailed information about the city's eventful past. The second important museum in Bishkek is the Art Museum, which mainly exhibits national craftsmanship. The buildings decorated with golden domes on the southern side of Ala Too Square house restaurants, shops and cafés.

The White House, seat of the government of Kyrgyzstan, sits right next to Ala Too Square. The magnificent eight-storey building was erected in the 1980s. In Soviet times, the communists had set up their headquarters in the chandelier-lined offices of today's parliament.

The White House of Bishkek came into the global media spotlight in 2005 when, in the course of the so-called Tulip Revolution, protesters stormed the seat of government and forced the then president, Askar Akayev, to resign and flee the country.

The White House also made international headlines during the bloody riots in 2010, when a fire destroyed parts of the building and destroyed numerous government documents.

The idyllic park in its surroundings is also home to the 28m high Monument of International Friendship. The huge concrete and marble column symbolises the bond between the Kyrgyz and Russian people through 13 figures.

A good 10-minute walk to the east brings you to Usup Abdrahmanov Street, where the Bishkek Opera House is located. With its columned porch and gabled roof decorated with sculptures and reliefs, it is one of the most beautiful buildings in Bishkek.

On the way to the opera, you pass the monument to Kurmanjan Datka in Pushkin Street. Also called the "Queen of the South", the stateswoman initiated the annexation to Russia in 1876.

The largest market in Bishkek, the Osh Bazaar to the west of the centre, is bustling all day long. Locals meet here to chat and shop for the necessities of daily life. Tourists enjoy the Kyrgyz hustle and bustle by strolling through the extensive selection, ranging from food and textiles to various household utensils, musical instruments and souvenirs.

The traditional Kyrgyz garments of the sewing guild "Kyyal" ("Fantasy/Dream"), which are handmade and even tailor-made directly at the Osh bazaar, are particularly sought after.

Churches and Mosques in Bishkek

Also worth seeing are the two sacred buildings of the two largest religious communities in Bishkek. The vast majority of the population is made up of Muslim Sunnis, who hold their prayers in the Gogolja Mosque, the main mosque in Kyrgyzstan. The next largest religious community is the Russian Orthodox Christians with their pretty white church with sky-blue onion domes.

Another sight worth mentioning, but with a sad background, is the Bishkek railway station. The building dates back to 1946 and was constructed by German prisoners of war under horrendous conditions. Most of the workers died of hunger, cold, illness or simply exhaustion. Their graves still lie - unmarked - near the railway station, which has remained virtually unchanged to this day.

In the Boulevard Erkindik, a large park in front of the railway station, there is an equestrian statue of the Soviet army leader Mikhail Vasilyevich Frunse, after whom Bishkek was named in its former name. A museum has been set up in the Frunse House, which describes his career from Bolshevik leader to commander over the Red Army.

Accommodation and hotels in Kyrgyzstan (booking.com):

Interesting articles for holidays in Kyrgyzstan: 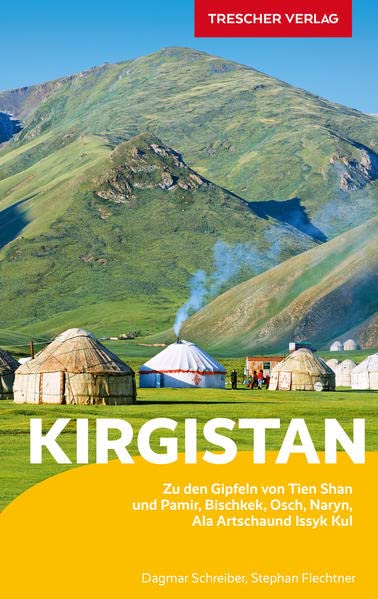